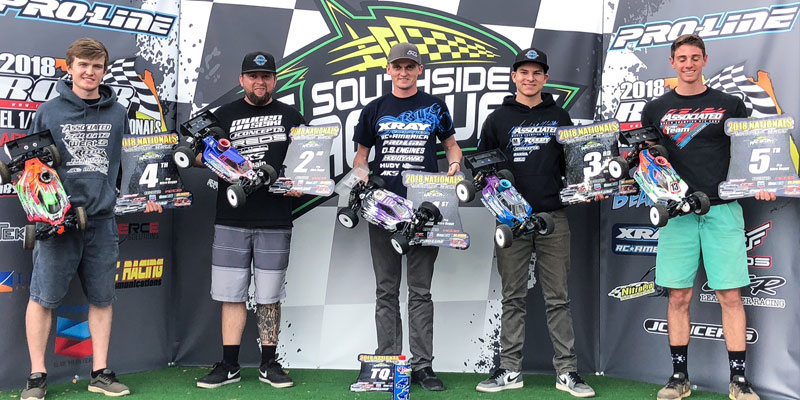 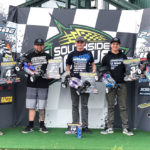 March 23-25 we attended the Fuel Nats warmup at Southside RC Raceway in Florida, the facility is amazing and I’m really looking forward to the nationals. It was another awesome layout by SIK track designs and the track preparation by the Southside Raceway crew was great, the surface held up really well.

The track surface is very tricky due to the grip levels changing drastically throughout the day, with the change of temperature and humidity, with a little bit of rain thrown in. This made car setup and tire choice challenging trying to keep up with the changing conditions. I think we got some good experience in and learned a lot for the nationals even though it will be a lot warmer in June.

Friday was open practice all day and it felt like we had my cars setup very well for the grip level on Friday, and we felt we had the tire choices narrowed down.

For round 2 we changed even more stuff on the nitro buggy to adapt for the grip levels that were climbing throughout the day, they did a resort for round 2, so the fastest guys were together in the same heat. We were a bit behind on the car setup and tire choice for the amount of grip that was on the track and I would qualify 2nd. For Ebuggy we again made more adjustments to try and accommodate the traction level and I took the tq for the 2nd round of ebuggy.

By the time the 3rd round of qualifying came around it was evening and the grip level decreased as the moisture came up on the track. This was a super close qualifier and I finished 2nd, but I won the tie breaker for tq by less than half a second. In Ebuggy I was again able to take tq and with that the overall tq.

Sunday was main day, it was overcast with a threat of rain, and before the nitro main it had sprinkled 3 or 4 times which kept the grip level changing before we even got on the track. First up was the dash for cash which acted like the A main warm up, it started in reverse qualifying order, we kind of guessed on what tires to run as we hadn’t been on the track yet and it had rained, so we made a guess based on what we felt the track would do and the tires ended up being a little soft for the grip level. I would end up finishing second in the dash for cash behind Maifield.

Next up was A1 for ebuggy, we again were testing tires and setup to adapt for the conditions and to gain knowledge for the nitro main, I was able to win A1.

In the Nitro buggy main, I had adjusted my car from what I had found out in the dash for cash and the ebuggy main and made an educated guess on the tires and it all worked out, my car felt awesome and easy to drive in the main and I was able to take the win.

Thanks to my family for always being there for me and supporting me, and most importantly I want to thank my my Lord and Saviour Jesus Christ, I wouldn’t be here without him.

Huge thanks to Neobuggy.net, LiveRC.com, RedRC.net, Circus RC and Carl Hyndman with RC Car Action for allowing me to use their pictures on my site.